Our “go to” navigator of choice is the Google app, WAZE.  We have been using this app since 2013 with good results. We call the female voice “Olivia” as in, Olivia Pope of the TV show, “Scandal.”  She fixes things!  We blogged about getting a refresher on our SUV navigation system from our car dealer.  This built-in dashboard system lacks an easy interface.  But, we do really like its exit ramp visuals especially when the ramps get complicated.  We’re thinking of Los Angeles here folks!

We will not be leaving home though without maps.  WAZE requires a cell phone signal and our built-in navigation needs the GPS satellites.  We remain old school AAA members and the maps we receive from them are top notch.  We have the entire route covered.

An unexpected delight though has been the vintage maps we purchased over the past two months on eBay.  We have collected 1930’s and early 1940’s state maps of Nebraska, Wyoming, Colorado, Utah, Nevada and California. Each of the maps were produced by gasoline companies with some names now in the past: Skelly, Conoco, Sinclair, and Texaco.  Each map displayed the location of their company’s stations along the major roadways.  This would be extra reassuring with the long runs across Iowa, Nebraska, Utah and southern California!  The prize of our eBay scavenging though was a 1936 AAA highway map of the entire United States.  It really helped us connect. 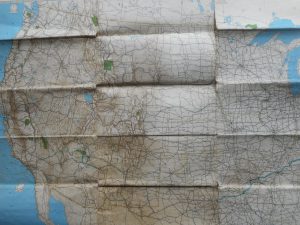 Our “About tab” suggests that maps of that era may not have been reliable.  But these vintage maps in our collection look fairly reliable.  We could navigate 6500 miles with them!

Five days before we leave! 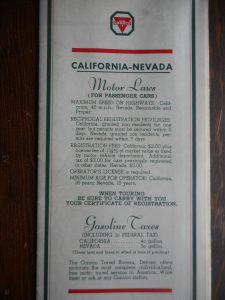