June 3 – Earl and Ethel arrived in San Francisco roughly six weeks after the Golden Gate Bridge first opened on May 28, 1937.  They took the following photo of the new bridge.  Did they ride the cable cars, go to Fisherman’s Wharf or Chinatown, or, eat Rice-O-Roni? We don’t know. There’s only their one picture.

Though we tried hard to duplicate the photo, for the first time on our trip weather was a factor.  The bridge was completely shrouded in fog when we arrived!  Although we found a few things to do to kill some time for a couple hours the fog never broke and the bridge never revealed itself better that what we could tease out below.  From our Berkley photo location, we headed north to the wine country and took our hearts with us! 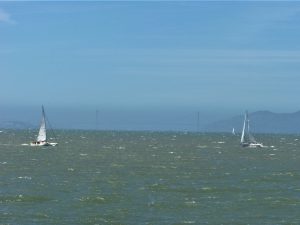 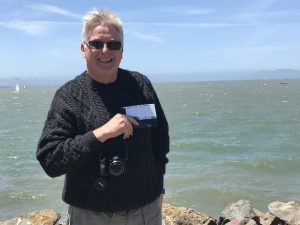 The bridge is somewhere in there!