Earl and Ethel Rasmussen left northeast Wisconsin in late June 1937 and were married just across the border in Illinois.  From there a 30-day, 6500 plus-mile honeymoon car trip began that took them across 14 western states.  Their journey was taken before dependable roads, reliable maps, GPS, cellphones, internet, credit cards, and most of the other travel comforts and devices  taken so much for granted today. The trip included stops in Denver, Los Angeles, San Francisco, Oregon, the national parks of Bryce, Zion, Grand Canyon, Sequoia, Yosemite, Yellowstone, and Mt. Rushmore, and many additional stops along the way.

In 2016 a discovery of their 1937 honeymoon photo album started this author Carl, their son on a two-year search to identify where they had been and the route they traveled.  A trip to duplicate their route was planned for spring 2018 after both Carl and his wife Lynn retired.  2017 saw the 80th anniversary of his parent’s marriage and epic car trip.  This blog hopes to chart the “Sentimental Journey” 81 years later as Carl and Lynn share their own discoveries and observations on this labor of love about a story based on love. 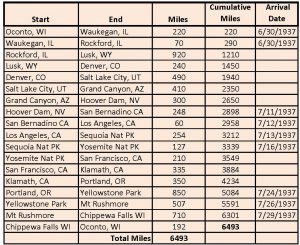 The chart above was created using known dates such as their marriage and dates that were written on the borders of their pictures.  The chart updates an earlier version appearing on the cross-country route map above when it was discovered that a few photos in California had dates handwritten on the back!  Doing the math, they averaged about 220 miles a day to complete the entire trip in 30 days. Not every day was spent traveling though.  At least three days were spent in Sequoia and Yosemite National Parks.