Earl and Ethel used the No. 1A Pocket Kodak to record their memories on this trip and in their life in Octono. 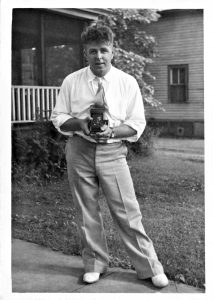 The camera was manufactured by Eastman Kodak from 1926 to 1932 and includes a pull out bellows. The model has a rotating view finder that allows taking portrait or landscape photos and has two tripod sockets.

It took 2.5 x 4.25 inch exposures, meaning prints were made at almost 1:1 ratio and resulted in a lot of visual information packed into each photo. This proved quite useful almost 80 years later as we zoomed in on license plates, signs and scenery details to gather location and other information.

Each roll of film contained 12 exposures which were advanced by turning a winding key at the top. A red window on the back shows the exposure numbers left as the film was advanced. The camera had what was called “autographic” features that allowed users to scratch information into the negative through a trap door on the back. Earl and Ethel did not use this feature on the trip, but did on other photos as seen below. 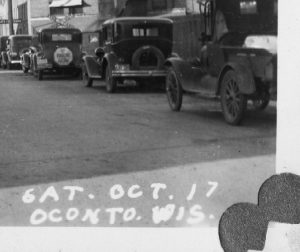 The camera did not have a flash attachment. The only low light options involved using “a flash sheet, slot stick, cardboard, and match.” Fortunately, all their photos on this trip were taken outside!

The camera is now in possession of myself, the couple’s son. I fondly remember taking pictures with the camera in the 1960’s. 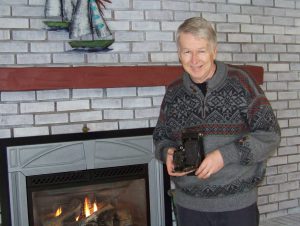