The most direct route from the Columbia River Highway through southern Idaho would have brought the couple to Yellowstone’s west entrance. There they would probably have stopped at the Eagle’s Store just outside the park entrance.  The original store started in 1908 on the same site but was razed and replaced in 1927. As of 2016, Eagle’s Store is still run by the same family who founded it. This photo from Wikipedia was taken in 1939 and is in the public domain from the National Park Service. Quite appropriately, it appears a 1937 Chevy sedan is parked out front at the gas pumps! The store is on the National Register of Historic Places. To be correct, the West Yellowstone entrance is in Montana! 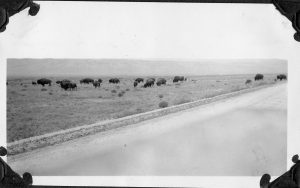 To see open range bison in 1937 was something very unique and special. Conservationists were still intensely at work during this period trying to protect the herd and bring the species back from the brink of extinction. This herd of bison is referred as the “foundation herd.”  All genetically pure American bison today trace their lineage back to this herd.  At the turn of the century in 1900 the total number of true bison was down to 23 and all were in Yellowstone Park.  The picture was in their album with Utah photos, but a Utah herd was not established until 1941 using 18 bison from Yellowstone. Their photo appears to be taken along Fire Hole River on the west route to Old Faithful (Hwy 191). At first glance the photo does not look like Yellowstone scenery, but a Google Street screen capture below shows a very similar scene near Fire Hole. Their photo also shows concrete curbing and such curbing was used in Yellowstone to keep tourist cars on the road and out of trouble!

No trip to Yellowstone would be complete without a stop and photo moment at Old Faithful! 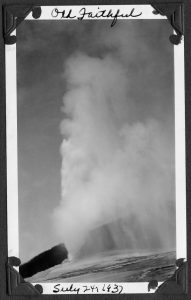 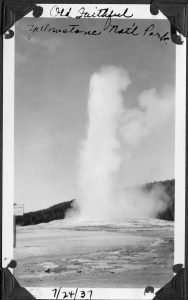 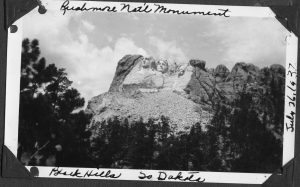 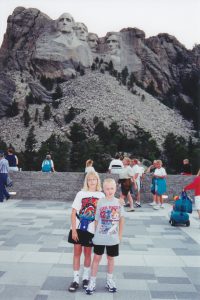 Grandchildren Krista and Erin at Mt Rushmore in 1999! 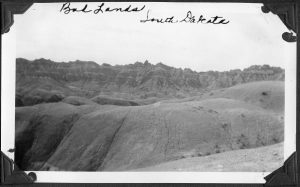 There were many panoramic overlooks along the Badlands auto route in the Badlands. Their one photo was probably taken at Conata Basin overlook. 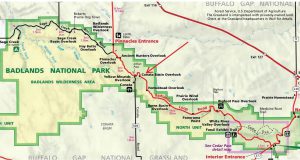 The following photo from Trip Advisor shows a very similar view for the same location. None of the other overlook web searches resemble theirs like this! 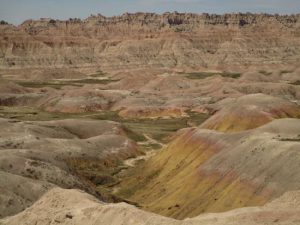 Fort Thompson is a village on the Crow Creek Reservation east of the Badlands. This was the last photo included in their album before returning to Wisconsin. 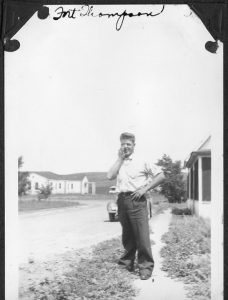