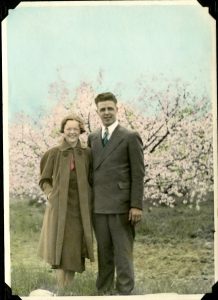 Earl Lloyd Rasmussen age 58, passed from this world on July 21,1969. He was survived by his 12-year old daughter, Carol; 16 year old son, Carl; 25 year old daughter Nancy; and 29 year old son, Wayne Earl.  Earl Lloyd died of a heart attack.  He had been a life long smoker.  His heart broke more than a bit when he lost the love of his life 12 years before.