June 8 –  In 2016 at the start of this adventure, identifying where Earl and Ethel’s “Pacific Ocean” picture was taken was a challenge.  We were not familiar with the Pacific coast and there was potentially over 900 miles of possibilities to check out!  Many times, the search for this photo was “set aside.”  Eventually finding the location at Gold Beach, Oregon became the last “pin” in our tour map of their 6500-mile trip and a cause for celebration!

While finding their original picture’s location was difficult, driving the 60 miles from the Douglas Memorial Bridge site though was fairly simple.  Although we knew we had the correct rock formations, when we compared our pictures with the original photo, the alignment of the rocks did not seem right.  We first thought this was due to differences between the lens of the two cameras.  Further examination determined that their photo was taken from a higher elevation.  But where?  There was a high bluff behind us but no indication of a pathway up.  A look at Google Maps revealed there was a separate parallel road on top of the bluff!  As we found a connecting road and drove the “Cape View Loop” we saw evidence that at one time it was the original US 101!  Although we found the exact location where they took their photo, we decided we liked our first photos best and included them.

Just north of this beach on another long beach walk, Lynn and I first put our feet in the Pacific Ocean.  At 55 degrees it felt a bit like Lake Michigan! 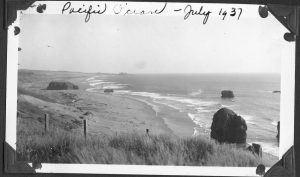 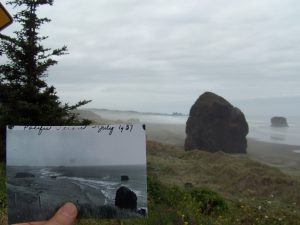 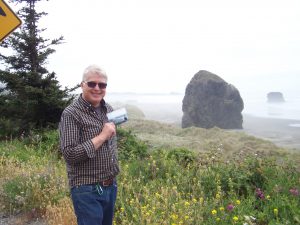 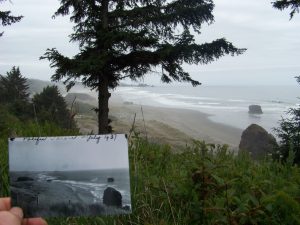 Photo taken from 150-feet up on a bluff 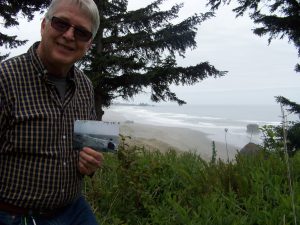 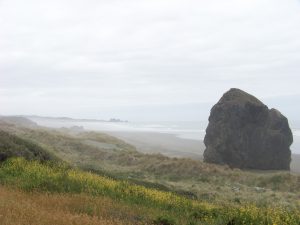 back at beach level 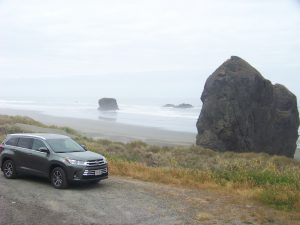 Not quite a ’37 Chevy, but helping us make the rounds!

One thought on “Day 38 Pacific Ocean”